Keeping with the bridal theme, White Gallery, a London Bridal show, is set to take place from the 22nd to the 24 of May. Each year it aims to bring us the next best designers in the wedding field, and this year is no exception.

Tobi Hannah is one of this years new talented designers set to make an appearance at the show. The London based designer launched her first bridal collection in 2009. Her short-length, tea dress bridal gowns are unique in the industry, giving her designs a funky, young distinction.

The three day White Gallery event is held in Battersea Park and is only in its second year but is already a huge hit with bridal magazines.

Tellusfashion advise bridal fans to keep an eye out for other up and coming wedding designers such as Terry Fox, The Vintage Wedding Dress Company and Sanyukta Shrestha at this event. 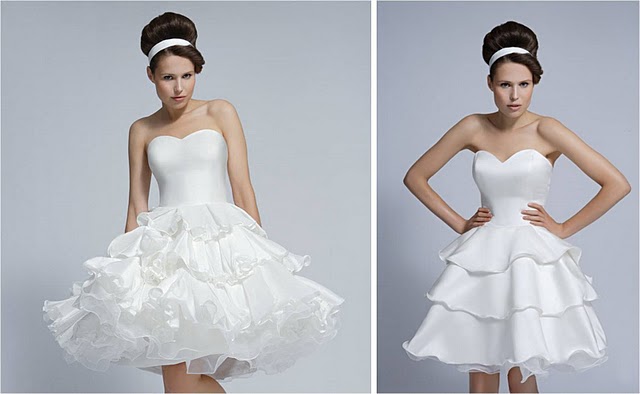 Would you wear a short wedding dress?

Who Will Design Kate’s Dress?

With the Royal Wedding getting closer and closer, the question in all fashionista’s minds is: “Just who is designing Kate Middleton’s dress?”

Well the answer to that question is far from being revealed, leaving the anticipation for Friday even greater. So who are the potential labels in the running to be the royal wedding dress designer of the decade?

A major contender for the role, Sophie Cranston is the brains behind Libelula. She has previously won the 1999 Designer of the Year Award and went on to work with the likes of Alexander McQueen. Libelula, meaning dragonfly in Spanish, was created in 2002 and uses bold colours and prints on well cut, flattering clothes.

Bruce Oldfield is a famous British designer best known for his bridal designs. He graduated from Central Saint Martins College of Art in 1973. In the past he designed many outfits for Princess Diana, making him a strong nominee for the wedding designer. In 1990 he was a awarded an OBE for his contribution to the British fashion industry.

Jasper Conran was also awarded an OBE for his contribution to the British fashion industry. Over his 20-years in the business he has successfully designed a popular Debenhams range, many women’s and menswear lines, as well as china and crystal for big brands. His signature designs revolve around the cut and silhouette of the clothing line. He also designed Princess Margaret’s daughters wedding dress in 1994.

A popular choice for the princess’s designer. Sarah Burton took on the role of Creative Director for Alexander McQueen after his death in 2010. She managed to produce a great first collection and has been rumoured to have designed the royal dress for the past few months.

Designer of the label Issa, Daniella Helayel is said to be Kate’s favourite designer. She has also bagged herself an invite to the wedding, could this mean she is the one? Her signature style is bright and feminine.

Kate’s sister was seen in this Alice Temperley’s shop recently, arousing suspicion that this could be the royal designer. Her label launched in 2000 for London Fashion Week and has since become more and more prestigious. The label specialises in wedding gowns for brides, bridesmaids, mothers of the bride and guests.

Philipa Lepley is one of the bookies faves. Her bridal business began in 1988 in South Kensington and business has been booming ever since. Her designs often appear in top bridal magazines.

Let Tellusfashion know who you think it will be.