Riccardo Tisci has brought so much to the Givenchy label since he was made creative director in 2005. I would give him the same credibility for transforming the Givenchy label into a modernised fashion brand as I would to Christopher Bailey and his work at Burberry. I think the thing that draws me to the Givenchy couture line now is that Tisci has brought an edge too the fashion house and has infused the brand with more imagination than its ever had before.

It comes as no surprise that his AW11 haute couture line is more than just fashion. It represents true imagination, creativity and craftmanship from the designer. Tisci used a variation of different embellishments and fabrics to create his stunning couture line including, tigers-eyes pearls with crystals which were used to replicate ostrich skin and one dress was constructed with perfectly symmetrical hand cut tulle pieces of fabric to create the illusion of fish scales. Amazing.

Take a look at the collection below… 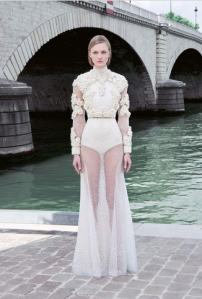 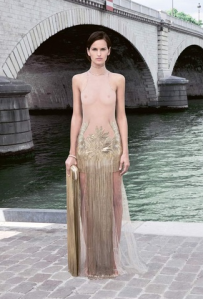 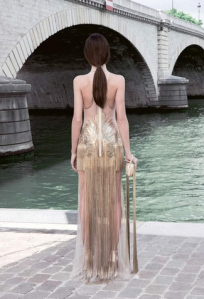 Weeks after Galliano’s very public split with Dior, no replacement has been confirmed for his position at the top fashion house.

We all know from the AW11 show that Dior has a large team behind the legendary name, but the fashion world still waits with bated breath to find out who will be taking the lead.

Givenchy’s Riccardo Tisci has been all but confirmed as the new creative head, prompting a domino fall of speculations as to who would then fill his empty shoes at Givenchy.

However, all parties involved refuse to confirm the rumours, and it emerged this week that Dior may not announce the name of their new creative director for many months.

Speculation is rife as to why the announcement has been so delayed, with legal issues over Galliano’s contract, and a fear that the new collection would be overshadowed by the scandal, being cited as reasons for the delay.

Either way, we know that the pressure will be on the new creative head to produce the spectacular collections Dior is known for. We continue to watch and wait for the announcement of the year.